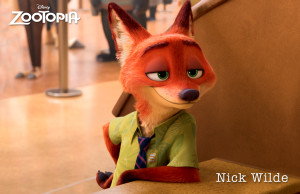 The film takes place in the vibrant, diverse world of Zootopia, a place where predators and prey live together in harmony, and are free to be whoever and whatever they want to be. These reasons are precisely why the land attracts Judy Hopps (voiced by Ginnifer Goodwin), a small bunny with dreams of being a police officer. Living on a farm, her parents fear this because, not only has a bunny never become a police officer, but they feel Judy should confine her aspirations to selling carrots on the family farm, something Judy has no interest in doing. After successfully completing police training, Judy is thrust into the force alongside other, more muscled animals such as rhinoceroses, rams, bulls, and elephants. Oh my.

Judy’s boss, Chief Bogo (Idris Elba), a buffalo, forces her to be a “metermaid” while the other animals take on the bigger crimes, specifically a case involving fourteen missing predators. Judy tries to show herself by issuing over two-hundred citations in just a couple of hours, but to no avail, as Chief Bogo wants to make sure she knows her place on the Zootopia police force. When Judy winds up catching a weasel after robbing a store, she is just about to be fired when Chief Bogo tasks her with finding a local otter who has been missing for over a week. If she can find the otter in forty-eight hours or less, she can keep her job, but if she doesn’t, she’ll be forced to resign. Judy enlists in the help of Nick Wilde (Jason Bateman), a fox, one of the most looked-down-upon predators in Zootopia, who has been doing number of odd jobs since he was young, after blackmailing him in order to get him to cooperate. Together, the two work to find the otter, but in turn, discover something bigger. Oh my.

Zootopia wears its intentions on its sleeves, but not in a way that distracts or simplifies its core themes. As you can probably tell, this is a film about both racism and sexism, two features of society that, while probably never going away so long as humans roam the Earth, do not have to be such amplified forces of hate. Screenwriters Jared Bush and Paul Johnston carefully construct a world, predicated upon a particular dream, and within that world, populate it with a variety of characters, some labeled as normative, others quietly labeled as the enemy that many are waiting to step out of line. It doesn’t take a scholar to see that rabbits represent women in society, while predators represent minorities.

It does, however, take considerable screen writing talent to create a film that can be enjoyed and understood by both children and adults on a fairly similar level. Even Pixar’s Inside Out was a film that sort of teetered a bit more to the adult crowd, with its lofty morals about children coping with their emotions, despite the fact that kids of all ages could at least enjoy the film as surface-level entertainment. Bush and Johnston pen Zootopia carefully, but bluntly, to the point where you can’t ignore its profound, but simple message of inclusion and acceptance of peers. Oh my.

Countless animated films have made themselves about preaching the gospel of acceptance and loving thy neighbor, but few have done it with the kind of thematic relevance, consistent wit, and zealous energy as Zootopia. Rather than sticking too a cleverly storyboarded, intricate plot, Bush and Johnston also have no problem playing around, allowing both Judy and Nick to free-roam in a sandbox full of original characters and allowing conversational/situational humor to prevail. This is why we get uproariously funny sequences involving three-toed sloths at the DMV, in addition to immensely creative, blink-and-you-miss-it chase sequences between a rabbit and a weasel. The film is not short on ideas nor energy, and the remarkable thing is how the film can go almost one-hundred miles an hour in every department and not even come close to running out of gas by the end credits.

Zootopia is a contemporary Disney classic and should be treated as such; it will certainly give Pixar’s questionable Finding Dory a run for its money in quality, awards, and overall relevance when it comes out this summer. This is a film that finds a way to be both sweet and simple, yet so urgent and topical, with an A-list voice cast, that you feel it’s a soft rallying cry for unity, which is all the more reason why you shouldn’t ignore it.