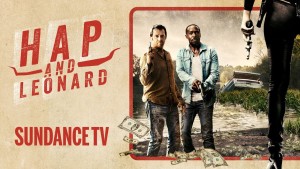 This show keeps getting better and better. I have just finished watching the 4th episode. There is something so quirky about it. It is supposed to take place in the 80’s (thereabouts). It centers around crime – trying to locate stolen money and dealing with the results. It is set in Texas with the 2 main characters wearing cowboy boots and hats, giving it a westernish vibe. But then you throw in the spandex wearing, spike-haired, blue eye-shadowed, 80’s murderous vixen and the show becomes a little more off kiltered, but in an entirely good way. This mix of characters makes me feel like I am watching a mixture of a Guy Ritchie Film and Pulp Fiction turned into a TV show. The violence reminds me of this combo as well. It is extreme and bloody but done flair and frivolity.

There are some excellent and well-known actors in the show: James Purefoy, Michael Kenneth Williams, and the ever lovely Christina Hendricks. Michael and James have really good chemistry together. It is completely believable that they have been best of friends since childhood. I do have to say, though, that Enrique Murciano’s acting was cringe worthy. It was so over the top. But I have to wonder if the director wanted it to look like that because otherwise one would think that he would have redone the scenes. Fortunately Enrique’s role is very minor,

I am rating Hap and Leonard a 10 because of how entertaining, quirky, and amusing it is. It is not up there with such monumental TV like Breaking Bad or The Wire, but I am surprised that more people aren’t watching this and proclaiming its superb entertainment value. Shows like this and Fargo demonstrate that TV can be even more than good writing acting, they can be art.