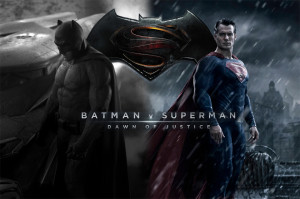 Batman and Superman are in a big screen film together for the first time in history. The result? A sloppy attempt at setting up the DC Universe. Batman v Superman has its moments though with great performances from almost every one and action that could rival Man of Steel, but it was difficult to not walk out of this film and feel overwhelmingly disappointed. For a film that finished filming over a year ago, you would think Zack Snyder and Warner Bros would make all the effort in the world to edit in and out the stuff that’s important and tighten the movie, but that isn’t the case.

It’s directed by the aforementioned Snyder and stars almost the entire Man of Steel cast along with Ben Affleck and Jeremy Irons as Batman and Alfred respectively. The performances are mostly great all around, including Amy Adams, who unfortunately felt out of place for most of the film. I have no problem with Adams’ portrayal or the character of Lois Lane being in the film, but she was misused and overused here. She and General Swanwick from the first film have several small scenes that are used for us to find out more about Lex Luthor. But the problem is, it’s a good 15 minutes of the film that could have shaved down to 3 or 4 minutes worth of scenes.

Speaking of Lex Luthor, the casting of Jesse Eisenberg caused a big stew of controversy when it was first announced, and I think it was warranted. I’ve seen the film twice now and had different opinions both times. The first time I was entertained by Lex but also confused as to why they went the route they did with the character. The second time, I was annoyed by the performance and the over the top portrayal of what should be a menacing villain. A few scenes here and there had those classic Luthor aspects that I’ve loved from the animated series and films, but the tone they went with for Eisenberg’s performance just doesn’t work. There’s little humor in an incredibly dark film, and Lex seems like he’s from a completely different film.

The other big problem the film unfortunately has is its title and marketing. Most of the marketing material was well done and proposed “the greatest gladiator match in the history of man”, but the reality is that it’s merely 10 minutes of a 2 and a half hour film. The fight itself is phenomenal. It doesn’t hold a candle to the fight in the comic book/film “The Dark Knight Returns”, but it’s probably the best part of Batman v Superman. The focus was all over the place though. Everything from the fight onto the ending is good cinema, but man does it take a long time to get there. I actually sat in the theater saying to myself “I’m kind of bored right now”. How in the world does that happen in a superhero film, let alone a Batman film?

There are still plenty of great aspects to this film, however. Diane Lane has a few heart-warming and gut-wrenching scenes. Laurence Fishburne provides some good comic relief as the head of the Daily Planet, Perry White. Jeremy Irons gives us our most involved and bada** Alfred to date. Even Gal Gadot, another questionable casting choice, showed acting chops that I didn’t think she had here and got me excited for the Wonder Woman film next year. Which brings me to the weirdest part about my feelings about this film. As many problems as there are, it didn’t get me any less enthused for the future of the DCEU. Some few surprises in the film, tease Justice League which was neat. And I’m incredibly stoked for Ben Affleck’s solo Batman film. With that said, I don’t think I can get that excited for Justice League if Snyder still directs. I have to believe many of the directing and editing mistakes came from him. But perhaps even Warner Bros themselves needs to take some of the fault for giving Snyder too much reign? Another positive though was Hans Zimmer’s score, unsurprisingly. I loved the way him and Junkie XL managed to weave in Superman’s theme with the new haunting Batman theme.

Ben Affleck may very well be the definitive Batman. Everyone knew his Bruce Wayne would be great but his Batman does not disappoint. There are scenes which rival the action in the Arkham video games in terms of style, creativity, and fluidity. I couldn’t be more excited for Affleck to write, direct, and star in the solo film whenever it may come out.

I honestly can’t believe I’m sitting here typing an average review for a film that’s one of my most anticipated of all time, but I am. There are plenty moments of pure greatness here, but for every incredible scene, there’s an unnecessary or strange scene out of place. Sure, I enjoyed the film more the second time I saw it, but I just can’t believe how sloppy of a filmmaking job this was. A missed opportunity for Warner Bros for sure.

Deadpool 2
The first Deadpool in 2016 took a heap of crap from critics and comic-book savants for being too jokey for...
Read More »